Stephen Darwall is the Andrew Downey Orrick Professor of Philosophy at Yale, many years after being a Morse frosh in 1964. He graduated as a Philosophy major after playing in the Band and managing the men’s swimming team. He went on to the University of Pittsburg for his Master’s in Philosophy and then taught at University of North Carolina at Chapel Hill until 1984. It was then on to the University of Michigan where Professor Darwall taught for 24 years, served as department chair for 8, and as Director of the Honors Program in the College of Literature, Science, and the Arts. In 2008 he joined Yale. He is deeply interested in moral philosophy and its history, and is focused on questions around the nature of moral obligation and well-being.

Prof. Darwall is happy to have lunch or dinner with interested students.

Professor of English and American Studies

Originally from Hong Kong, Professor Dimock was a graduate student here from the late 1970s to the early 1980’s, and has been back as a Professor of English and American Studies since 1997.

If you’re interested in digital work, or publishing online, he is be happy to offer any help he can. 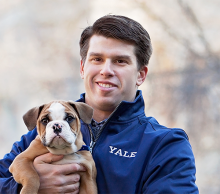 Kevin Discepolo graduated from Yale (Morse Class of 2009) majoring in American Studies. As an undergraduate, he was also a member of the varsity lacrosse team. After Yale, Discepolo received a Master’s in Marketing from Durham University in the United Kingdom, as well as a Master’s in Sports Industry Management for Georgetown University. Prior to returning to New Haven in 2014, he worked for Scholastic, Inc. and the Department of the Interior in Washington, D.C.

In November of 2016, Discepolo became the proud caretaker of Yale’s mascot, Handsome Dan XVIII. Walter (as the bulldog is known around campus) and Discepolo can be frequently seen on daily walks through campus, or at many of the athletic competitions. 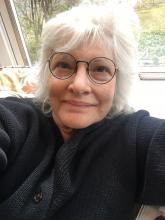 For 20 years Toni Dorfman has taught full-time at Yale, where she is a professor of theater. She holds a bachelor’s degree in philosophy, earned at Carleton College and the University of Iowa, and a master of fine arts degree in directing from Columbia University. In 2003, she cofounded the annual Yale Playwrights Festival.  At Yale in addition to teaching practical classes in acting, directing, and playwriting, she has taught seminars in revenge tragedy and moral ambiguity, biography and drama, and, to come in 2020, representations of the underworld. In summer she’s taught Sophocles’ Antigone in the Yale Warrior-Scholar Project helping enlisted veterans prepare for college.

Since 2009 she has directed seven major productions of 17th-century operas for the Yale Baroque Opera Project, including Cavalli’s Il Giasone, Scipione Affricano, and La Didone, Sacrati’s La finta pazza (American premiere), Monteverdi’s Il ritorno d’Ulisse in patria and L’incoronazione di Poppea, and this spring Rossi’s Orfeo. Her interest in ancient Greek myth, epic, and drama – the inspiration for Italian baroque opera – is lifelong. What in particular she loves about early opera is not only the expressive beauty of its music but also its casts of human and divine characters, bringing together two worlds in the same space.

Other recent productions she’s directed include Conor McPherson’s play Shining City in St. Louis in 2016 and Brecht/Steffin’s Mother Courage and Her Children at Yale in 2018 with a new score by Miles Walter ’18.

Her own plays, including Rounding Cassiopeia, Family Wolf, Third Wave Fems, One of the Damned Few (with Bud Thorpe), and The King of the Cimbri, have been developed and presented in London, New York, Santa Fe, Los Angeles, Chicago, and in New Haven at Yale Rep and the Long Wharf Theater.

In her twenties she cofounded The Shade Company, a repertory theater in New York and a charter member of what is now the Alliance of Resident Theaters/New York.  She’s served on the editorial board of Shakespeare Bulletin and the national board of the University/Resident Theater Association. As an actor she’s played Lady Macbeth, Titania, Helena, Aldonza, Grusha, Dorine, Hesione Hushabye, Pirate Jenny, Kagekiyo’s Daughter, Mother Courage, and Clytemnestra, among scores of other roles; in film she’s played Queen Marie in Ionesco’s Exit the King (1973) and Candace in Edward Columbia’s Plain Fiction (2019), with dozens of television commercials in between.

She is married to Yale historian John Lewis Gaddis. They live in East Rock with a pollination garden, designed by Eliza Shaw Valk, her daughter, in the front for butterflies and bees.