A Brief History of Morse

In his report on the year 1955-6, Yale President A. Whitney Griswold announced his intention to add at least one more residential college to the system Yale had launched only two decades earlier. “We have the colleges so full that community life, discipline, education, even sanitation are suffering,” he stated. This news bred wild rumors about four or five new colleges being added to Yale’s system. Nothing substantial was announced until the spring of 1959, when Eero Saarinen was chosen as the architect, and the Old York Square behind the Graduate School became the designated site. The Old Dominion Foundation, established by Paul Mellon ‘29, provided money to build two “radically different” colleges that would alleviate the growing strain on the older colleges.

Morse College is an eclectic structure built on an odd, angular site. In a modern attempt to capture the spirit of Gothic architecture, Saarinen eliminated all right angles from the living areas. One of Morse’s defining features is the “Lipstick,” a pop-art sculpture by Claes Oldenburg and brought to the college by then-Master Vincent Scully in the 1970’s. The Morse Common Room, once described by Scully as “an architectural disaster,” has improved with age. Unburdened by the clutter of the buttery and game room attractions, the Common Room has become an open space full of a seating and adorned with a grand piano and warm fire place–the perfect spot for Morsels to get together, chat, or study. Morse College Council meetings, held each Tuesday at 9:00 p.m., attract crowds with free pizza or other delicious New Haven area treats.

During the summer of 1996, the College underwent a substantial renovation. The scheduling of this renovation gave Morsels an opportunity to design several new activity areas and greatly modify existing ones. The basement of entryway A saw the installation of a new music module, improved darkroom, and a new laundry room. The library received a new computer room and new furniture in its remodeled foyer. Major improvements have brought new vitality to the much expanded weight room and CD Cafe. Several new basement spaces were created, including a fully equipped student kitchen and a student lounge dedicated to Ericka Bishop-Becker ‘97. The Common Room was given new wall coverings and repaired furniture. All of these changes made Morse a better environment for study, relaxation, and enjoyment.

In a 1959 article in the Yale Daily News, Eero Saarinen discussed his design for Morse. “Our primary effort was to create an architecture which would recognize the individual as individual instead of an anonymous integer in a group.” Saarinen’s efforts certainly achieved their desired ends. Morse’s profoundly unique architecture has ensured that neither the college nor its students are anonymous integers in a greater whole, but that both are recognizable as individuals in their own right.

With the continued support of generous donors, Morse College became the 11th residential college to undergo renovation beginning in May 2009. The top-to-bottom refurbishment is now long complete, updating the facilities of the college to meet growing student needs while preserving the design and style Morse is known for.

The centerpiece of the renovation project is a new crescent courtyard addition, completely underground, that provides a variety of activity rooms, including a 50-seat theater, music practice rooms, an art studio, a sound studio, a digital media room, exercise facilities, and spaces for dance and aerobics. The space is joined to both Morse and neighboring Ezra Stiles College with a below-grade light court, spanned by a pedestrian bridge. The former 11,699 square feet of shared social space in Morse and Stiles swelled to 15,300 after the renovations. Pierson and Davenport, by comparison, together have 14,638.

Other completed work at Morse includes an upgrade of all mechanical and electrical facilities, a new roof, new windows, updates to meet fire-safety and handicapped-accessibility codes, and air conditioning for public spaces and the Head of College’s suite. Student rooms, common rooms, the gallery, game room, and the buttery have also been upgraded to accommodate the goal of Yale’s residential college system as a center for social interaction. There has also been a major reconfiguration of the kitchen and servery that expands the capacity of the dining halls in both Morse and Stiles. 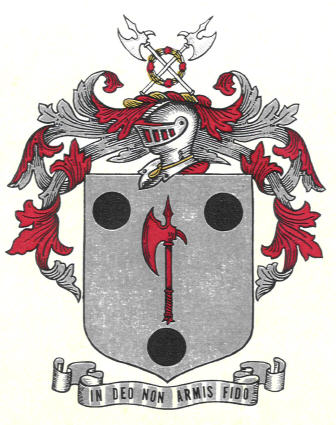 Crest: The symbols above the helm. Morse has two diagonally crossed (or in saltire) axes and a wreath with 4 roses called a chaplet. The leaves of a chaplet are most commonly green, but it is not uncommon for them to be tinctured. The axes stand for execution of military duty. The wreath is the crown of admiration and joy. Blazoning: two battleaxes in saltire (x’d) argent (silver) surmounted (on top) of a chaplet (rose wreath) ors (gold).

Helm: The helmet at the top of the coat of arms. Different helms mean different things; a barred or open helm like this denotes the highest classes of nobility.

Coronet: Morse doesn’t have any titles, so there isn’t a crown above the shield like there would be for the King of Spain, etc.

Shield or escutcheon: The shield itself, which is broken down into the field and charges. Field: background of the shield. While Morse’s is a simple, solid color, some are complex with divisions, bars and patterns. Charges: emblems on the field. Morse has 3 roundels (circles) sable (black) and a red axe. Roundels can be blazoned by their tincture - that is to say “roundel sable”- but are often replaced with one word. A black roundel is called a pellet. Blazoning a shield starts with the background, then subordinary (or less important) charges, then the main charge. Luckily Morse’s is pretty simple. Blazoning: “Argent (silver) between three pellets (black circles) a battleaxe gules (red)”

Mantling or lambrequin: the drapery tied to the helmet above the shield. In this case it is the silver/white and red flourishing. Blazoning: mantled argent (white/silver) doubled (banded with) gules.

Motto: The Motto is Latin for “In God, not arms, I trust.”